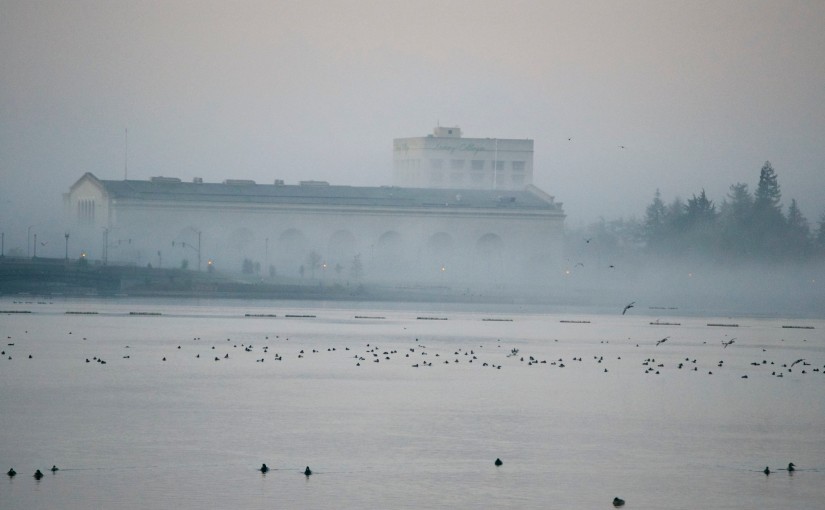 Back on this day, March 18th, in 1870, the California State Legislature created the countries first Wildlife Refuge. “An Act to prevent the destruction of fish and game in, upon, and around the waters of Lake Merritt or Peralta, in the County of Alameda.” (the full text is below).

It seems like there are various stories of the origin story, Samuel Merritt worried about his cows, wanting to protect birds and people from hunters guns, or wanting his real estate investments to be free of gun noise. He had purchased land around the lake, donated the lake edge to the city, and was building homes to sell. (source)

The “lake” was created a couple years earlier by Dr. Merritt when it was first dammed, though I think there was still some tidal flow, since then the lake has undergone many changes, and avoided some other horrible fates (a bridge was proposed going across its middle, and I’m sure given half a chance, developers would have filled it in further).

Today, the bond Measure DD, has reversed some of those changes, bringing the lake closer to its original tidal sloughness. The bulk of this work was uncovering two sections of the channel at 10th and 12th streets, the current runs free instead of through small pipes.

There are still flood control gates between 10th street and 880. This flood control consists of a pump station and tidal gates, mainly to prevent floods in heavy rains, particularly where it might also meet a high tide. The only other time the gates are closed are for regattas on the lake.

Measure DD also improved how our storm drains worked to keep out some of the worst trash. But there are still many difficult issues to grapple with — our housing shortage, and the impact that has on our homeless population, and how that impacts our parks, ongoing issues of trash and treatment of our waterways, and how people of all stripes can use the park together.

I am hopeful in that I know a lot of great people are at work grappling with those issues. There are various plans to celebrate the anniversary — due to Covid-19, most of those are pushed off into the future — we hope you will join them.

California Wildlife Act: Eighteenth Session Chapter CCXXIV
An Act to prevent the destruction of fish and game in, upon and around the waters of Lake Merritt or Peralta, in the County of Alameda.

Approved March 18, 1870
The People of the State of California, represented in Senate and Assembly, do enact as follows:

Section 1: From and after the passage of this Act, it shall be unlawful for any person to take, catch, kill, capture, or in any manner destroy, any fish in the waters of Lake Merritt or Peralta, in the County of Alameda, except by the use of a hook and line; but it shall be unlawful to use any set lines, night lines or crawls in said lake.

Section 2: And be it further enacted, that from and after the passage of this Act, it shall be unlawful for any person to take, kill or destroy, in any manner whatever, the grouse, any species of wild duck, crane, heron, swan, pelican, snip, or any wild animal or game, of any kind or species whatever, upon, in or around Lake Merritt or Peralta, in the County of Alameda, and within one hundred rods from high water mark upon the land around said lake.

Section 5: This Act shall take effect and be in full force on and after its passage.

The budget fight looked like it was going to be supremely ugly, but the Council buckled down to business and hammered out various drafts, brought amendments, argued some more. The meetings were long and the public continued to voice forceful opinions.

Not that the positions are in the free and clear. The funding is only guaranteed for the first year. The second will be looked at mid-cycle to see where the budget falls. There is also talk of a ballot measure to fund park maintenance over the long term. Which might pick up the positions where the budget otherwise cannot.

There is a question as to how soon those positions can be filled, they are hopeful for the fall, but it might take a good while longer. 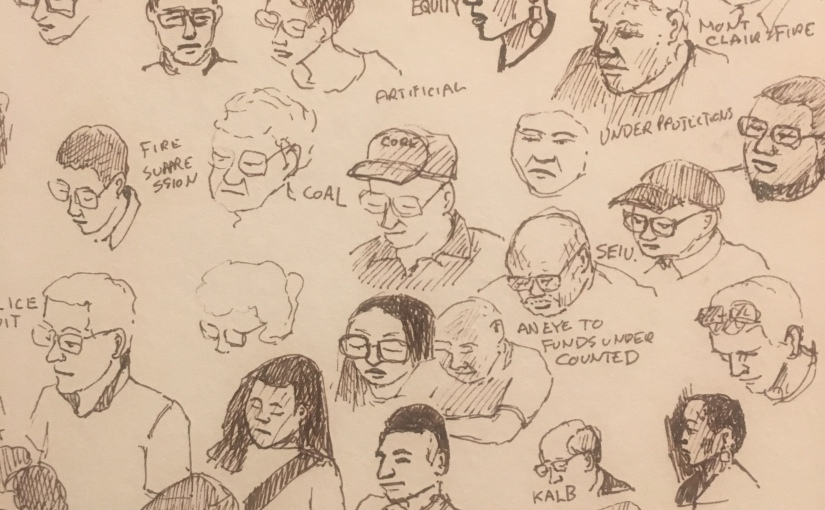 There were concerns from many quarters about the Mayor’s budget: from illegal dumping, city workers, homeless advocates, fire safety in the hills, to specific concerns about funding for various non-profits, and it’s lack of faith in priorities laid out by the community at large.

Our specific concern (not to diminish any others — in particular a solution to our homeless crisis is intimately tied to parks) was where parks positions which were to be cut. This has an impact on not only our concerns at Lake Merritt, but Oakland wide — where parks would potentially be closed for lack of staff.

A support letter signed by 220 lake walkers in favor of restoring and improving parks funding was delivered by RNCF to council. They had tabled the last two weekends for this effort.

We believe that access to parks is good for the well being of all Oakland residents and visitors… and that without solid maintenance our investments in parks would be at severe risk, even those that are said to be jewels of Oakland.

We firmly believe that volunteers and the community at large play a role in maintaining our parks through things like Weed Warriors and Adopt a Spot and our own organization, but that this is not enough. We need the involvement and work of our excellent city employees, those of DPW and OPRY&D. We need them for a commitment to sustain our parks. The finance office indicated they are particularly concerned about Park’s funding.

Please write the mayor and your city council member and encourage that these positions not be cut and to work for sustainable parks. 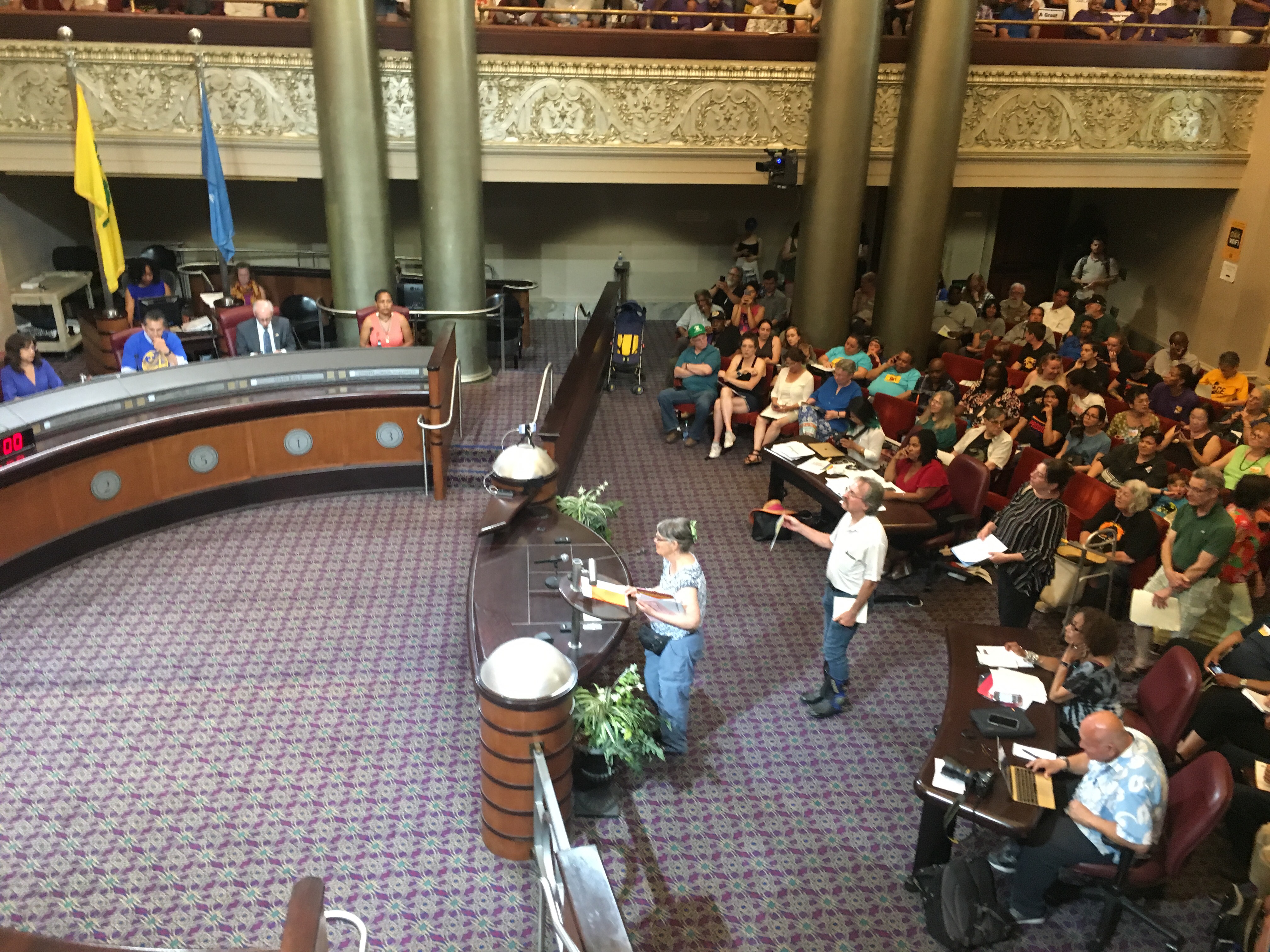 A few years a back, the staff at the Rotary Nature Center produced this excellent little tree guide. The text came from Constance Taylor, Blake Edgar, Paul Belz, and California Center for Natural History. The illustrations are from John Muir Law’s nature illustration club.

Often, the trees we see in cities are from different parts of the world, so they can be hard to identify. This guide will introduce you to 10 of the most common trees you’ll find around Lake Merritt, Oakland, & other urban areas in California. Some of them are native & some of them are introduced, but all are part of our urban ecosystem. A giant thank you is due to John Muir Laws and his nature journaling club for creating all the beautiful illustrations! It’s our hope that this community-created tree guide will help you learn a little more about what else is “growing on” all around us in Oakland. See if you can find all 10 trees outlined. Happy searching, learning, and exploring!

Without further ado, checkout this Lake Merritt Tree Guide and amaze your friends when they ask what the heck is that tree.

The Rotary Nature Center has been opened to its full hours since March 12, 2019 with our new Naturalist Program Director Joe Moore (since June 2019).

I have been going to the advisory committee meetings for Measure DD for a few years now. This is representatives of various groups and communities who meet with the Measure DD project manager to discuss the progress of various projects and to give advice and direction on what should or should not be pushed for.

One small project that had escaped my attention — that came up in the most recent of meetings — was the design of 6 interpretive signs. These would be distributed about the lake – but two were meant for the Rotary Nature Center area.

Members of the committee rightly pointed out that the signs ought to be multi-lingual, and that additional content could be placed on the web. Especially, if (as described to us) the intent was to help get across the message of not feeding the birds, and good more generally given the diversity of Oakland.

The lack of signs around the lake has always been a bit surprising, and Community at Lake Merritt had been looking at working on signs of our own, so it’s good to know this has been thought about.

It is nice to know a little bit of funding has ended up near the Rotary Nature Center — but I do wish I could rewind the clock to get the Center listed as one of the projects in Measure DD.

One of my little markers of the season is the swallows. Sometime in April (maybe I’ll pin the exact date someday, I first saw them April 9th this year), swallows appear at the lake and begin nesting.

The channel is where I first noted them: Northern Rough Winged Swallows nest in light fixtures and drains under 280, and now the 10th st bridge. They have a strange and unique chattering call. I watched as one sorted 3 inch sticks to carry up into the darkness of a drain.

Cliff swallows built these amazing little mud nests on Laney College buildings and on the 12th bridge (maybe they’ll start new ones on the 10th as well), this year in 2018 (and maybe previous years, if so I missed it) on the Oakland Auditorium building. Cliff swallows seem to get up high into the sky too, you might see then swirling high above Laney.

Low tide you can sometimes see them come get the mud for their nests. Rough Wings seem to stick closer to the surface, zooming back and forth over the water, though you’ll see Cliff Swallows doing it as well. In fact, standing on the 12th street bridge (as of mid May) you get a pretty good view of them as they skim across the surface.

Violet Green Swallows also come to the lake but they are on the northside (cliff and northern rough wings can also be found in other places around the lake). If you find a large lawn like the ones over by the Bellevue Club you’ll can find them zooming about.