I’d noted earlier in the year that the cormorants had not returned to the nests on landside — the tree above the playground.

But after our big rain last week, I found that maybe half a dozen cormorants are nesting in the tree — and several in a new tree further to the east. 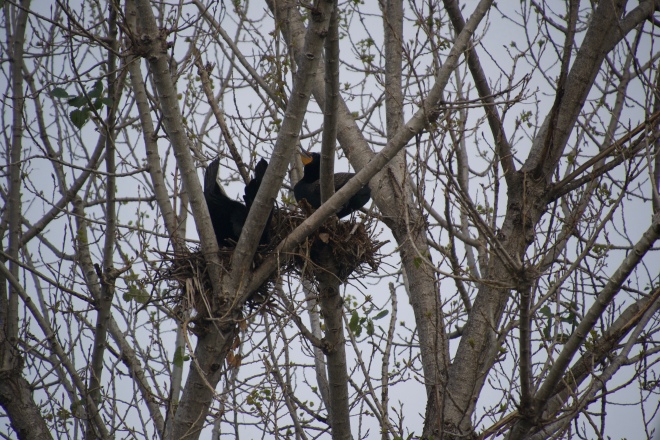 Last year, these nests did not seem to have any results, so it’ll be interesting to see if anything comes of it this year.

As I was watching I noted a fox squirrel climbing the one tree, and proceeded to roust upset cormorants from their nests to investigate.

Hard to tell if it found anything, whether it was looking for cached food or an egg or two. The cormorants barely made an effort to defend and the squirrel was only slightly wary.

Raccoons are on the islands as well, so maybe its surprising any eggs hatch on any of the trees.

The Double Crested Cormorant are back to the nesting tree. As of Feb 28th (the last time I checked) they have yet to reoccupy the tree they colonized last year above the playground next to the Rotary Nature Center.

You can get some close up time with the cormorants down on the channel, where they are often hunting on one tide or another.

They are wary of people and will often swim away, but sometimes if you are still enough, you’ll find them right beneath you — as in the photo below. Trailing bubbles as it searched the wall growth. It came up with a fish shortly after. 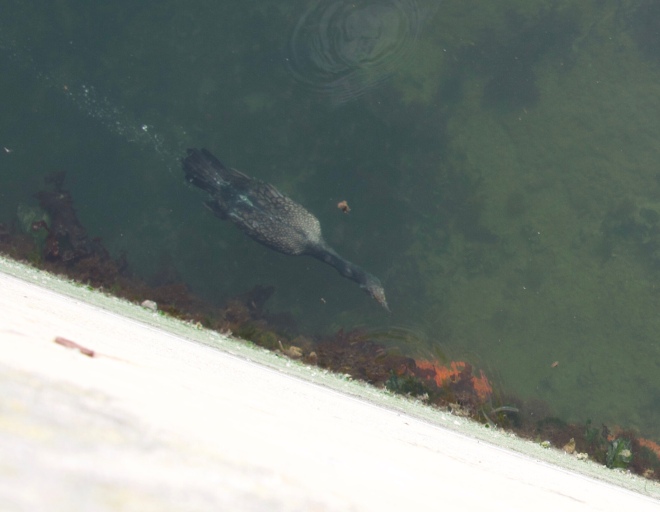 The prey was little silversides – one little school circling in the shallows, no doubt wary of the birds in the water nearby. 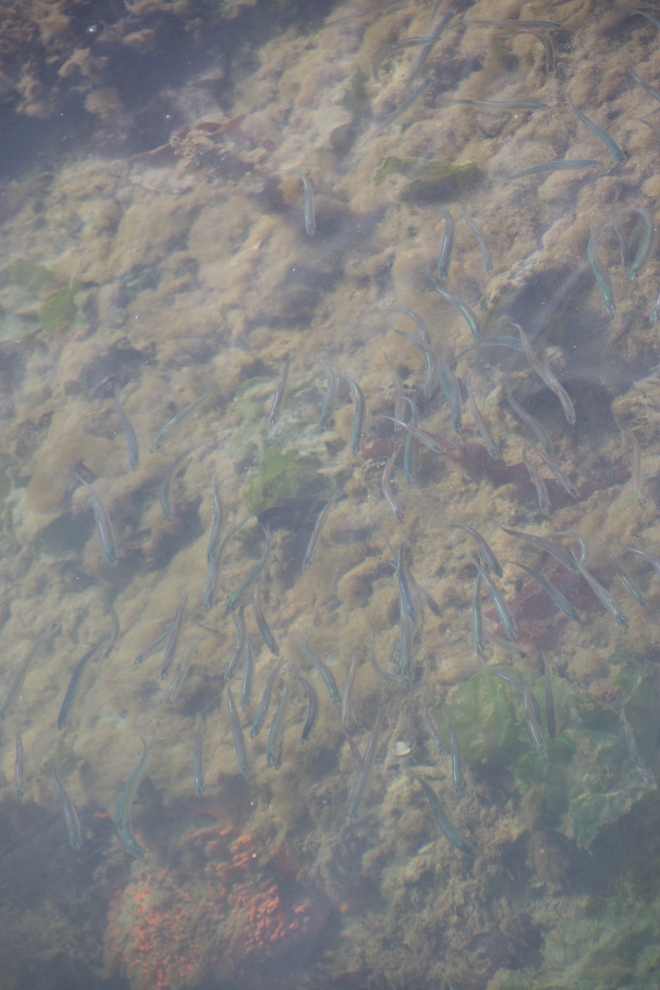 Lake Merritt is justly famous for the many species of birds that overwinter on the lake . The occasional appearance of a sea lion or river otter makes headlines but did you know that the lake is also home to a great variety of micro-charismatic critters?

The most obvious (and perhaps least charismatic?) are the mussels that line the edges of the lake. They stick out in a low tide. Gulls love to feed on them — you may often see a gull with one in its bill. Gulls will also deliberately drop a closed mussel onto the pavement to open the shell and get at the meaty interior. Take a look inside an open mussel shell and there you will find yet other organisms. 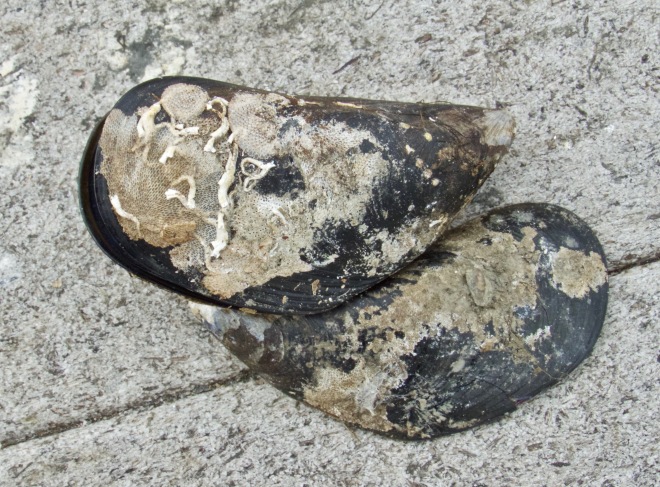 Less obvious but more important for the food chain is the plankton in the lake. Plankton consists of tiny critters that one needs a microscope to see and can include diatoms, protozoans, small crustaceans, and the eggs and larval stages of larger animals. The Nature Center (when we reopen again!) has microscopes that school groups and other visitors can use to get an idea of the diversity of life in the lake. 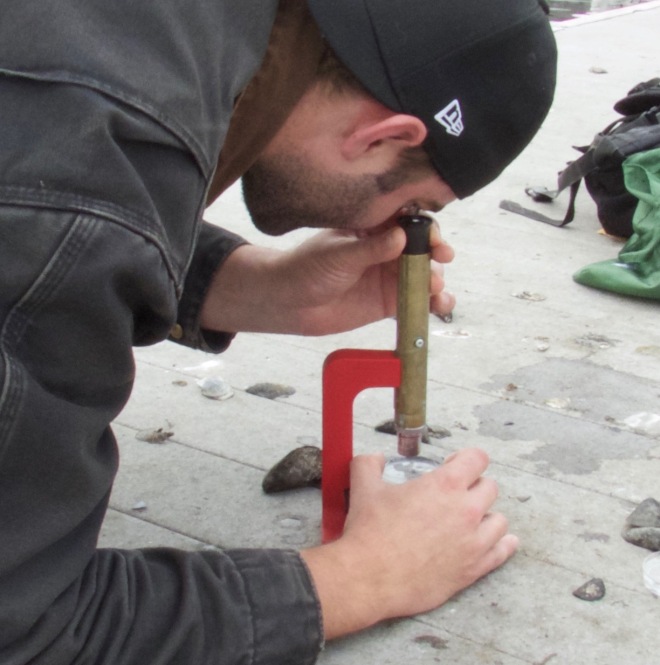 The most “famous” invertebrate at the lake is a new kind of beach hopper discovered many years ago by a 14 year old boy, Jim Carlson, who went to great lengths to find out what it was.  (You can find his story at Bay Nature Magazine). Like most of the rest of the lake’s flora and fauna this “bug” probably was introduced on the hull of a ship. No one could identify this critter and it turned out to be a new species dubbed Transorchestia enigmatica. These beach hoppers may still be present on the small stretch of remaining beach near the bandstand. See if you can find one. You’ll find a more typical species of beach hopper along the channel.

My all time favorite invertebrate — seen at the lake back in 2015 — was a family of sea hares hanging out under the pedestrian bridge. Sea hares are related to octopuses and can eject a stream of ink to hide from potential predators.

Take a walk around the lake at low tide and see what you can find in the water.

One of my favorite winter residents of the lake is the Eared Grebe. It’s a small diving water bird (most closely related to Flamingos) that is flightless much of the year. The males turn into demonic looking birds just before they head out for mating season in the Spring. If your lucky, you can also sometimes glimpse their forays underwater. Their favorite food seems to be the the Bay Pipefish which seem to provide the grebes a run for their money.

The pipefish seem to be getting a reprieve this year with no Eared Grebe’s in their “traditional” hunting grounds (aka the spots I’ve seen them in over the past few years). I had seen one Eared Grebe on the lake near the bird islands earlier this year, but I have not seen it since. Things have been left to the Pied-billed Grebes, an equally cute species but which seems to mostly confine itself to the the refuge area on the northern side of the lake. Eared Grebes in my observations have favorite spots dotted around the lake. Last year, I’d remarked a trio showing up by the pedestrian bridge at the Southern end of the lake in early October where they could be reliably found for months after.

There seems to have been some e-Bird sitings over the last couple of days, so perhaps they are still to arrive. I did note, however, the week they arrived last year would have coincided with the fires in Sonoma and Napa. With the air quality so bad, I wonder if the birds thought better of flight, and decided to stick it out where they are. According to my Bay Area Birds (David Lukas, 2012), Eared Grebe’s make great use of the South Bay Salt Ponds, and nest down in the Hayward.

Data in my various sources of citizen science data (iNaturalist and eBird) seems too thin to make any kind of call on that hypothesis. And at the end of the day, I hope they still show up.

A couple of years ago they finished the shoreline from the Boating Center up to the Geodesic dome. There’s a nice wide path, some benches looking over the lake, and new landscaping around the parking lot, and a healthy bit of shoreline between the path and water. It can be a good spot to see the comings of goings of birds and boats if you are so inclined.

Parts of the shoreline are still fenced off — letting plants get situated and take good root, I presume, there is a path of old rip wrap and stone set on dirt where one can sit at the shoreline and take it in.

I found myself there the other day on a lovely fall day, I unintentionally flushed a Green Heron from the bank. It did my the favor of sitting on a white float for a few minutes, a rare chance to hang out with the most elusive heron of the lake.

I’d passed a Great Blue Heron earlier in the day sitting in shallow water seemingly unconcerned by the humans stopping to goggle at it. It seems like it is the only Great Blue on the lake but it is often out in the open. Great Egrets and Snowy Egrets come in bunches and are hard to miss, and one can often find a Snowy Egret right at your feet as it forages the edges of the lake.

The Green Heron seems more secretive and has a rather narrow range on the lake (all the iNaturalist observations are in the Northern part of the Lake, though I’ve it a time or two further west).

The little heron flew on a few minutes later, and I settled in to watch a sparrow — before I was graced with a final visit from a White Pelican, flying not too far overhead. 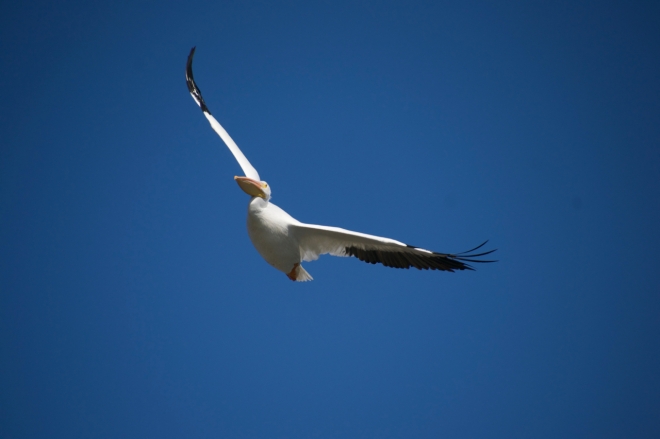 In my 4 years living in Oakland, I have often stopped to watch and listen to the Cormorants nesting out on the bird islands of Lake Merritt. Their guttural moans, groans, cries — however you might describe them, seem like they are from some other larger beast lurking on the island just at the edge of hearing.

Last week, April 7th, the night after a hard storm — the winds rocked my two story building — I’d done a circuit of the lake curious of what damage there might be and stopped across from the Cormorants, who seemed business as usual.

Except, the groans were much closer, much louder than I’d ever heard them — and I suddenly realized — behind me. I turned around to find a dozen or more cormorants in a tree I’d never noticed them in before. Actively building nests, and had seemingly just started.

Cormorants would fly into the tree carrying a branch, and the one at the tree, would greet the incoming bird with a neck rub, and a groan — perhaps enticement for its partner to keep coming with the twigs and leaves. The groans rose and fell, sometimes in conjunction as the birds flew in an out.

Three days later, Cormorants were still busy building/repairing nests… though the interactions sometimes seemed less than friendly (the birds on the nests sometimes seems to have to wrestle for control of the stick, as if they can’t decide who should have the honor of placing it). It is clearly hard work for the birds to bring the sticks up to the trees, often flying out into the lake and doing a pass before they can get the right angle. But the nests in the new tree seem more or less complete.

I can’t be 100% certain they hadn’t already started nesting there before the storm. If you have any evidence one way or another (a photo from before the 7th), I would love to know.

In any case, it will be interesting to see how successful they might be here in this new tree. I’ve seen raccoons scale that tree before. It will also be a slightly chancy thing for walkers and pedestrians to walk under the tree. It already is a little smellier!