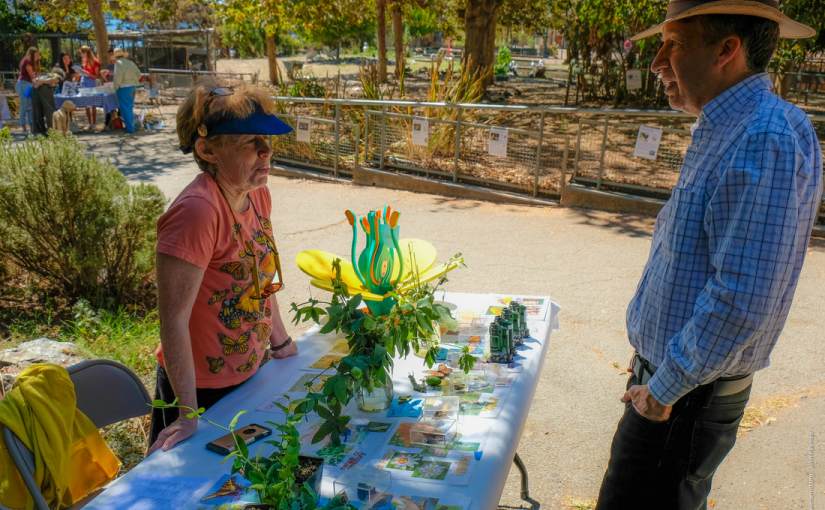 If you were at the opening of the Rotary Nature Center you would have found CFLM folks outside of the Center, tabling with various activities about the lake.

We had a second go of this last month, and now are at it again this coming Saturday Oct 5th.

The popup idea is just to have a series of nature related games, info, activities to attract the interest of the public and do some nature interpretation. We hope to do this regularly over time, expanding the number of activities we have, and the number of volunteers who’d be willing to share their knowledge.

For a moment, this past Saturday, Feb 16th, 2019, it looked like it was going to be a miserable day. Volunteers had begun arriving to set up tables at 1130, and shortly after we’d gotten settled it began to pour with rain. We’d already had a good set of people stopping by, many people eager to have a look at the Center.

But the skies cleared, and people started arriving en mass. The Community for Lake Merritt board was out, helping dissect owl pellets, a game for looking at bird feet,  looking at insects, and pollinators. Lake Merritt Observatory had an excellent “From the Bottom Up” table with things taken out of the lake, water testing, and someone helping interpret the new Mutual Air Bell (and air quality art project). Golden Gate Audubon was down by the water showing people the birds.

Inside, OPYRD Director Nicholas Williams started off the proceedings by unveiling a plaque in appreciation of the Core Team who have worked for the last year setting plans and policy into place. The group, which is disbanded as of the opening, has included Karis Griffin of OPRYD, Alan Briskin consultant, C.J. Hirschfield of Fairyland, James Robinson of the Lake Merritt Institute and community activist Jennie Girard. He went on to thank other groups who have contributed including Community for Lake Merritt which brought in the substantial donation which paid for the refurbishment, and the partner organizations.

Mayor Libby Schaaf then took the stage to thank everyone and honor Stephanie Benavides for her contributions to the RNC over the last 40 years.  She shared her own childhood experiences at the RNC being mentored by Stephanie and shared the Patricia Polacco picture book, I Can Hear the Sun, written about Stephanie. Stephanie was also awarded a plaque to hang in the RNC and while local children held both ends she, together with the new lead naturalist, Angelina Manno, cut the ribbon officially reopening the RNC. 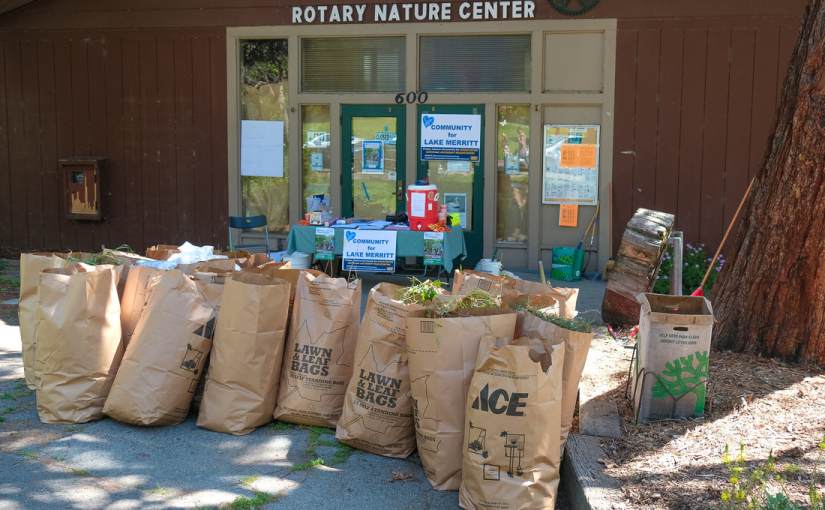 Check out the new paint job on the building and you might get a chance to peek inside (if the windows in the garden are not papered over at least.)

Exciting news from Golden Gate Audubon, they will be offering three courses at the Rotary Nature Center starting in January on into the Spring. Courses include:

More info can be found on the GGAS website.

Karis Griffin announced a grand opening celebration for the Rotary Nature Center this coming February 16th, 2019. A Saturday from 1-3:30pm.

Join us – RSVP here on Facebook to let us know you are coming. (If you don’t do Facebook — which I can understand — please put it in your calendar! )

Over the past year, the city has been working to clean the facility up — with the guidance of Karis and her “core team” Alan Briskin, C.J. Hirschfield, Jennie Gerard, and James Robinson. If you’ve been by the building recently, you’ll notice it has a fresh coat of paint. On the inside, they’ve also repainted, and are laying out new floors. They are also building an interior restroom, and a door out to the butterfly garden, among other things.

Community for Lake Merritt has been biding its time, and this past December our board met with the Core group (plus Nicholas Williams the head of OPRYD, and Ken Lupoff head of OPF), to discuss how our group help the Rotary Nature Center once it has opened.

We at Community for Lake Merritt are excited that the Nature Center will be soon open again and are committed to helping any way we can to help its success — as well as the programs announced in 2018. We are hoping to also help facilitate the involvement of a much larger community.

There’s still plenty of things to be done, and open questions, but it’s very exciting to be at the stage where the Nature Center will soon be open and functioning again.

5 proposals were presented and discussed at the June 2nd meeting at the Lake Merritt Garden Center.

The Core group is having follow up meetings with these groups & individuals to see what the next steps are. Karis Griffin indicated the Center would open sometime this summer, though no firm date was presented.

It was a little disappointing that we did not have the opportunity to present our own proposal due to a missed email.

From today’s update from OPRY&D tomorrow Saturday, June 2nd, we will hear five proposals for programs at the Rotary Nature Center.

For each proposal, there will be about 10 minutes for a high level summary and 10 minutes for community questions and support. The five presentations will be the following:

April 21st, 2018, we organized a clean up crew through Adopt a Spot. About 12 of us over the course of 3 hours — members of Community for Lake Merritt, City Staff, the Rotary, and others — worked to clean up the grounds of the Rotary Nature Center — in particular the Bee Garden.

Some 30+ bags of garden waste later things were looking much better. There is still plenty of work to do, so we hope to organize more regular work on the grounds.

We also planted some Dutchman’s Pipevine as well to hopefully provide a good spot for wandering Pipevine Swallowtails. 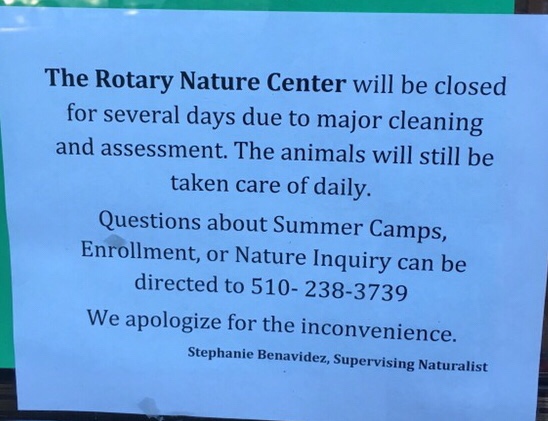 My App Timehop noted a sad anniversary today: that of the closing of the Rotary Nature Center last year.

We’re finally coming to some concrete steps moving forward to a new and reinvigorated Center.

Todays’s update form Karis Griffin of OPRYD, brought to light her committee to govern and guide this effort, a fine crew of Lake Merritt stalwarts: C.J. Hirschfield (E.D. of Fairyland and involved with Rotary Club and many other things), Jennie Gerard (a veteran of city hall, and founder of Weed Warriors, and Lake Merritt Advocates), James Robinson (E.D. of Lake Merritt Institute), and the aforementioned Alan Briskin (the facilitator hired by the city).

The next public meeting is set for Saturday, April 7th, 2018 from 9am to noon. This meeting will be held at Studio One, 365 45th Street, in the Temescal neighborhood of Oakland.

If you plan to attend, please RSVP to parksandrec@oaklandnet.com

The committee went together this past Thursday to the Berkeley Shorebird Park Nature Center, to visit a potential model for our Nature Center (well worth a visit if you have not been — they have a pretty amazing docent program too).

The agenda for this meeting is

A follow up from the Jan 24th meeting, Karis Griffin from Oakland Parks, Recreation, and Youth Development details how they are currently moving forward. They are selecting someone to facilitate the process with a goal “to create a new Rotary Nature Center that is the center piece of Lake Merritt, the nature-oriented learning institution it was destined to be.” 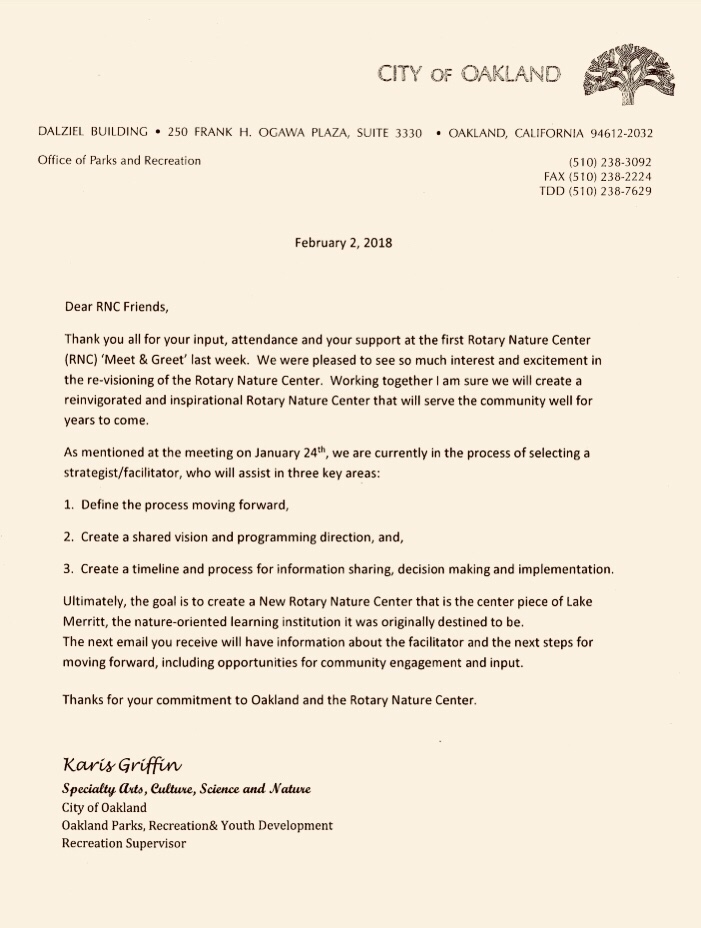