In my 4 years living in Oakland, I have often stopped to watch and listen to the Cormorants nesting out on the bird islands of Lake Merritt. Their guttural moans, groans, cries — however you might describe them, seem like they are from some other larger beast lurking on the island just at the edge of hearing.

Last week, April 7th, the night after a hard storm — the winds rocked my two story building — I’d done a circuit of the lake curious of what damage there might be and stopped across from the Cormorants, who seemed business as usual.

Except, the groans were much closer, much louder than I’d ever heard them — and I suddenly realized — behind me. I turned around to find a dozen or more cormorants in a tree I’d never noticed them in before. Actively building nests, and had seemingly just started. 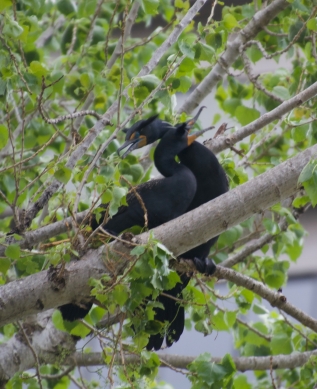 Cormorants would fly into the tree carrying a branch, and the one at the tree, would greet the incoming bird with a neck rub, and a groan — perhaps enticement for its partner to keep coming with the twigs and leaves. The groans rose and fell, sometimes in conjunction as the birds flew in an out.

Three days later, Cormorants were still busy building/repairing nests… though the interactions sometimes seemed less than friendly (the birds on the nests sometimes seems to have to wrestle for control of the stick, as if they can’t decide who should have the honor of placing it). It is clearly hard work for the birds to bring the sticks up to the trees, often flying out into the lake and doing a pass before they can get the right angle. But the nests in the new tree seem more or less complete. 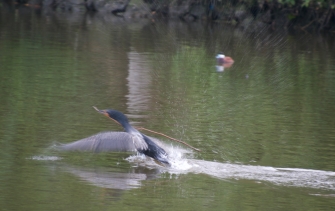 I can’t be 100% certain they hadn’t already started nesting there before the storm. If you have any evidence one way or another (a photo from before the 7th), I would love to know.

In any case, it will be interesting to see how successful they might be here in this new tree. I’ve seen raccoons scale that tree before. It will also be a slightly chancy thing for walkers and pedestrians to walk under the tree. It already is a little smellier!